During the Summer of 1860, the people began to build their homes, for until that time they had lived in their wagons and temporary dugouts. The first houses were built on Center Street between the present First West Street and the spring at the west end of town. The houses were
built close together in fort formation for mutual protection against any Indian raids. In 1861 and 1862 a military organization was created to give better protection.

While the militia was always required to be ready for self-defense and emergencies, they were strictly enjoined by President Brigham Young to give the Indians no cause of offense. The settlers were enjoined not to kill any game or take the fish which the Indians claimed belonged to them, but to buy what they needed. This would give the Indians food and they would not have to steal from the settlers. President Young always maintained that it was cheaper financially to feed the Indians than to fight them. At the same time, the settlers were to be firm with the Indians and not let them trample on their rights.

A year later a martial band was organized and years later (1882) was named the Hyde Park Band, which became well known throughout the valley. 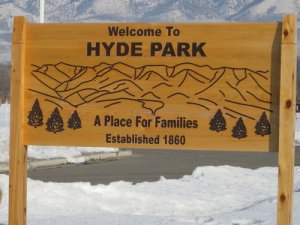 community flavor and is just moments from city services and Utah State University. We have a great life here.